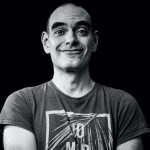 Although in the War of Cuba and the Philippines of 1896-1898 various types of artillery were used by the Spanish Army, including medium and heavy calibers despite the difficulties in dragging them in the rough overseas terrains (especially in the Philippines, where Chinese carriers were often used), there was a piece that stood out for its ease of maneuver, the 75mm Krupp mountain gun –and the Plasencia mountain gun, similar to the former although with a bronze barrel. The 75mm Krupp mountain gun was a rapid-fire artillery piece made of steel, which for transport, “a lomo”, four mules were used: one for the barrel, another for the front of the gun carriage, another for the rear and a fourth for the wheels.

The 75mm Krupp mountain gun would prove its effectiveness in the battle of San Juan Hill, where the two pieces deployed by the Spaniards managed to locate and silence in just three quarters of an hour the four pieces of Grimes’s battery deployed on El Pozo Hill, while remaining hidden from the enemy throughout the whole day (unlike the Americans, the Spanish artillery used smokeless gunpowder).

And we can not continue without showing our gratitude to Javier Planells of La Pica en Flandes, the shop of the Museo Histórico Militar de Valencia, for the valuable photographs and information he kindly sent us of the original Krupp and Plasencia exhibited in the museum.

For this tutorial we will need a good model blade, a file, an old toothbrush and cyanoacrylate glue. Likewise, we will use Vallejo Model Color paints (three-digit numerical references, eg 863, for other brands’ options, consult this color chart) as well as any brand’s priming spray (although I always recommend Citadel’s).

Our 75mm Krupp mountain gun consists of six parts, the gun carriage, two wheels, two steering wheels or cranks and the barrel. Although the piece comes very clean, we will eliminate any mold left over and optionally, we will clean it with a wet toothbrush and dry it with paper towels. We must take special care when cleaning the most delicate pieces, such as the lever of the gun chamber or the steering wheels.

Note: the barrel used in this tutorial has a small design error, a vertical reinforcement near the right of the mouth of the piece that should be further back, and that has been corrected conveniently for production, so the guns that you buy will be correct. 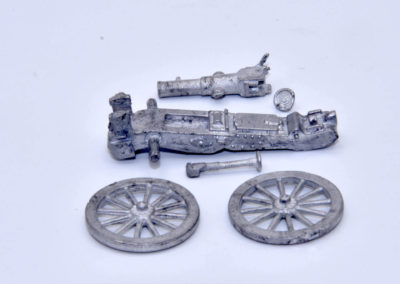 First of all we will glue on the left side of the barrel support the longest steering wheel, so that it is parallel to the ground, as can be seen in photo 2. 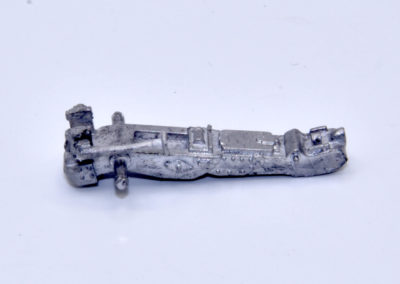 Next, we will glue the shorter crank on the right side of the gun carriage, where we find a small hole. In the Krupp design drawings, this crank is seen in a position parallel to the wheel, but in existing models that we have had evidence, we can see it slightly oriented backwards, and so we decided to glue it in that position. 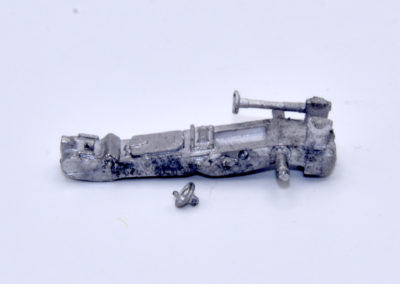 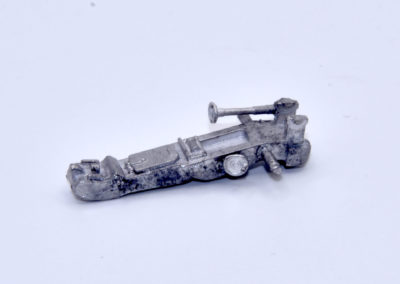 Next, we will glue the wheels, taking care that they are perfectly parallel to each other. 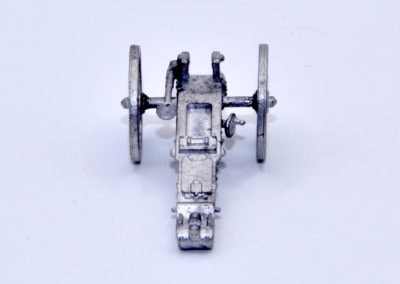 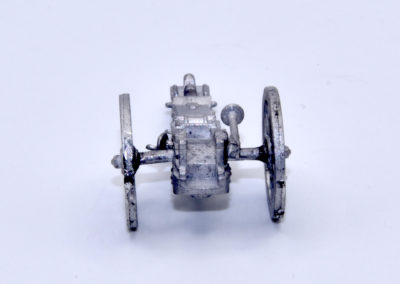 Finally, we will glue the barrel on its support. Unlike the US M1897 3.2-inch field gun, for design reasons the stumps do not form single piece to fit into the gun carriage, but are divided into two halves, the upper part with the barrel, the lower part in the gun carriage. So, we will have to take care that the barrel is perfectly straight when it is time to glue it. 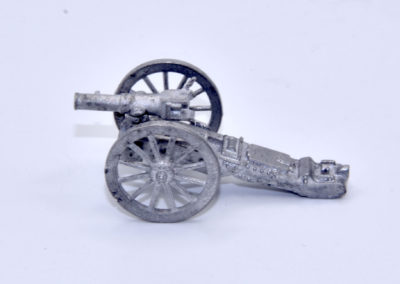 Before starting to paint, we will glue the assembled piece to a support that allows us to manipulate it without having to touch it with our fingers, like this empty bottle of varnish. For this we will use cyanoacrylate, a glue strong enough but that will allow us to remove it easily once painted. Once in our support, we will prime the piece with white or black primer spray, according to our personal taste (for this case, I have preferred white, but it is not that important). And then, we will paint the base colors: the gun carriage (made of metal) with Neutral Grey (992), the wheels (made of wood) with Chocolate Brown (872), the barrel with Gunmetal Grey (863) and the side crank with Brass (801). 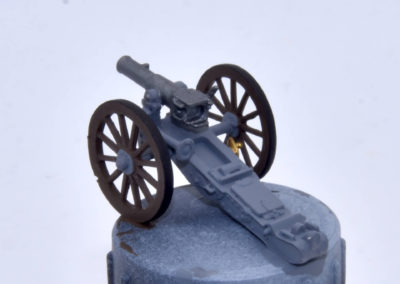 When I paint guns with wooden carriages, I usually use the dry brush technique to represent the roughness and grain of it. Although in this case it did not make much sense given that the gun carriage is metallic and therefore lacks such rugosity, the same does not happen with the wheels, made of wood. Thus, on the base color we will apply two successive layers of dry brush, the first with Beige Brown (875), the second with Cork Brown (843).

If a lighter wood color is desired, use Beige Brown (875) as the base color, with successive dry brush of Cork Brown (843) and Iraqi Sand (819) or similar. 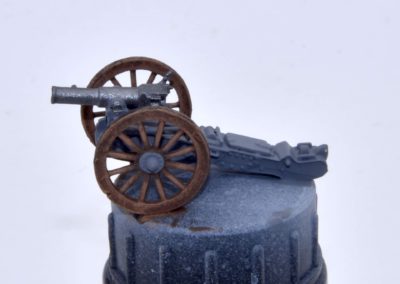 Although sometimes we see Spanish guns of the time painted gray, for the colonies they sent them unpainted, in the raw tone of the metal, that is, black. After seeing the photos of the Military Historical Museum of Valencia, I realized that it is a matt black tone that lightens by the wear and the dirt, reason why, instead of painting it in black and then highlighting somehow, I opted for the opposite formula: paint the base color with gray and simply apply to the whole piece (including the tube) a wash of Black (950) with a pinch of Chocolate Brown (872), very diluted in water. This wash will give the gun carriage a black tone but not completely matt, as it will highlight the volumes to a more grayish tone. We let it dry. 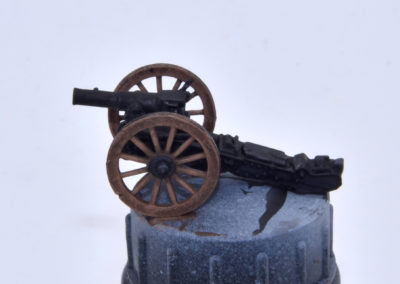 Once the wash is dry, we will repaint the metals, again with Gunmetal Grey (863) for the barrel and Brass (801) for the side crank. If desired, the tube can be painted with a lighter metal, such as Natural Steel (864), as it appears on the Museum piece. 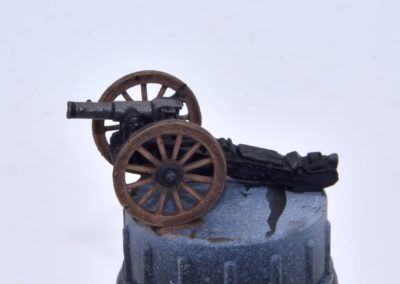 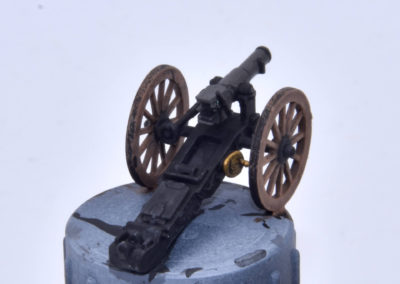 Finally, we simply “stain” the area of ​​friction of the wheels with several successive layers of dry brush: first with Chocolate Brown (872), then with Cork Brown (843) and finally with a touch of Olive Green ( 967). 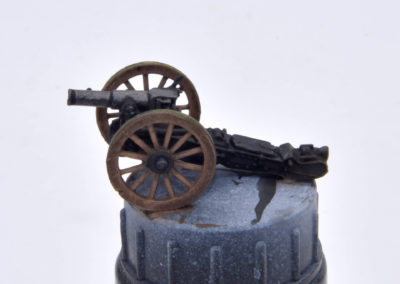 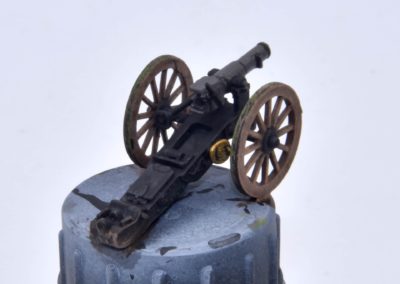 For the terrain, I always use textured paste from Vallejo, normally Desert Sand (26.217). Usually I glue the figures first to the base, then I cover the whole of it with paste and finally I place the cannon in its place, which remain stuck with the paste itself. However, in this case in which the different parts have to fit very well (especially the gunner turning the side crack), we will reverse the order. First we will put paste only in the area where the cannon should rest and fix it to the base, and then, while the paste is still fresh, we will glue the figures to the base. Once the paste and the glue are dry, we will finish covering the rest of the base with paste, and decorate it with small rocks. When it dries, we will paint it with a wash of Chocolate Brown (872) and successive dry brushes of Tan Yellow (912) or similar, and of Buff (976). Finally, we will decorate with vegetation. 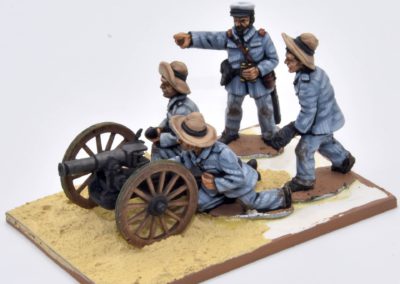 The Spanish artillerymen wore the classic rayadillo uniform. For information on this uniform please visit  the article “Rayadillo: the Spanish overseas uniform” and for painting techniques the tutorial “Painting rayadillo“. 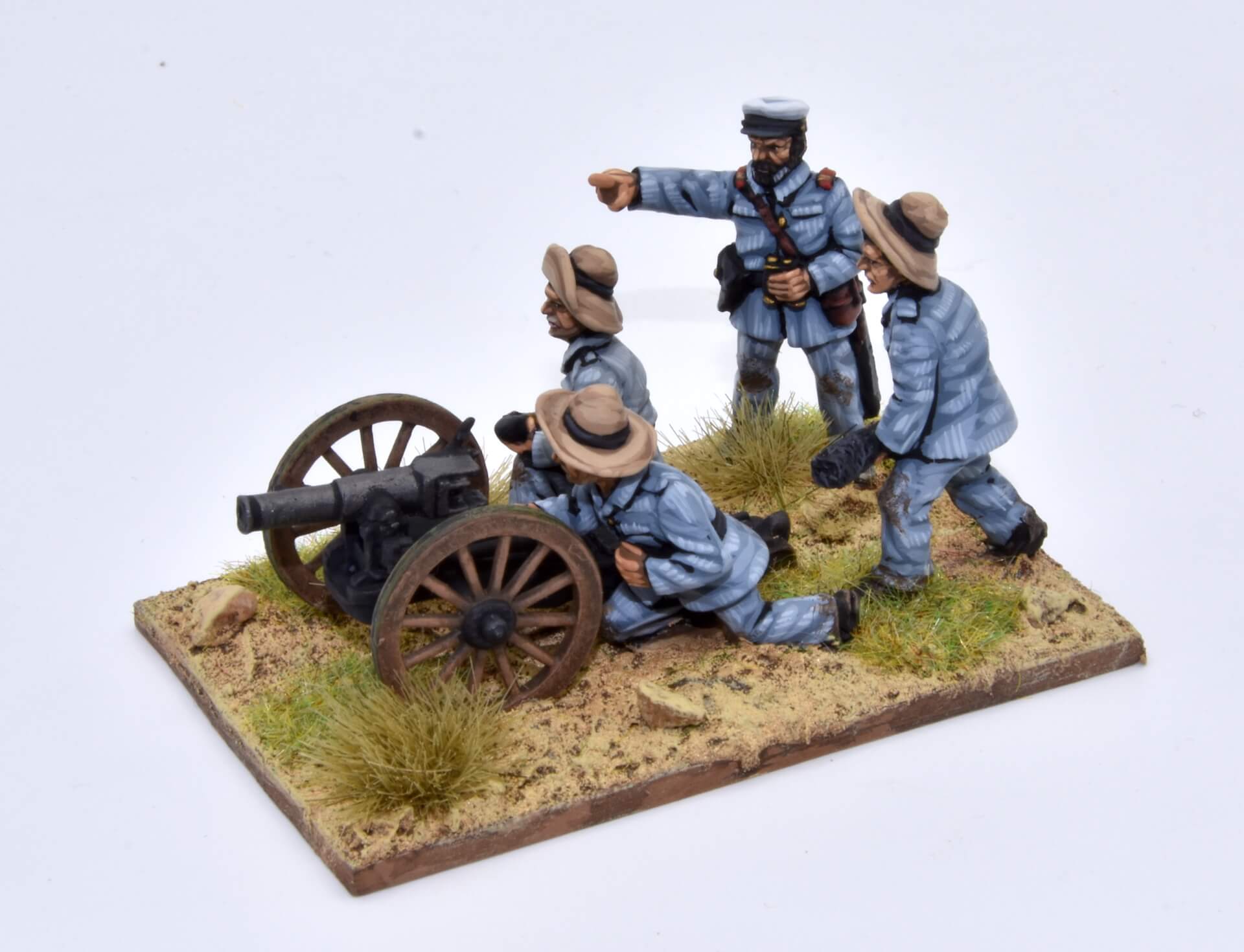 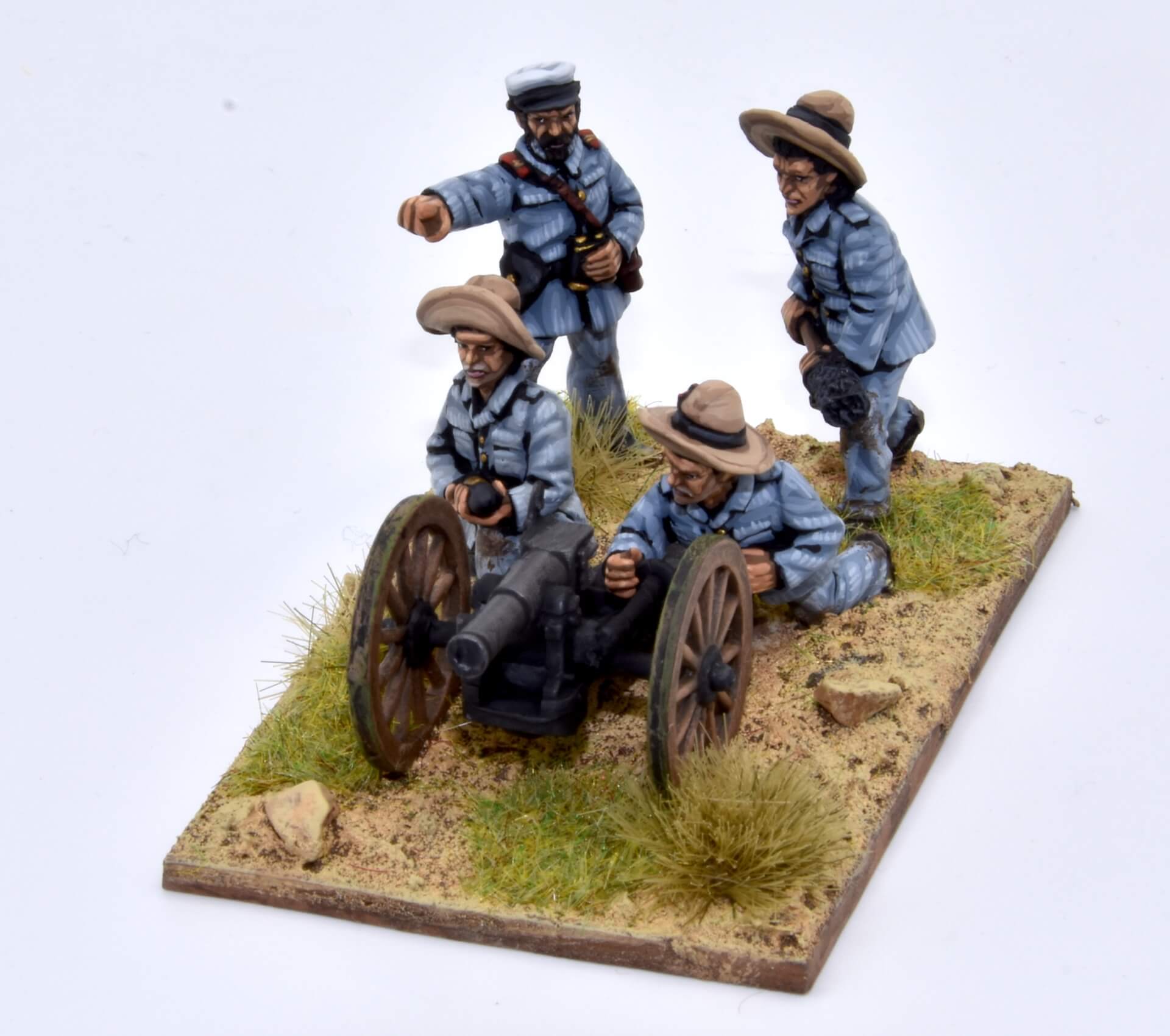 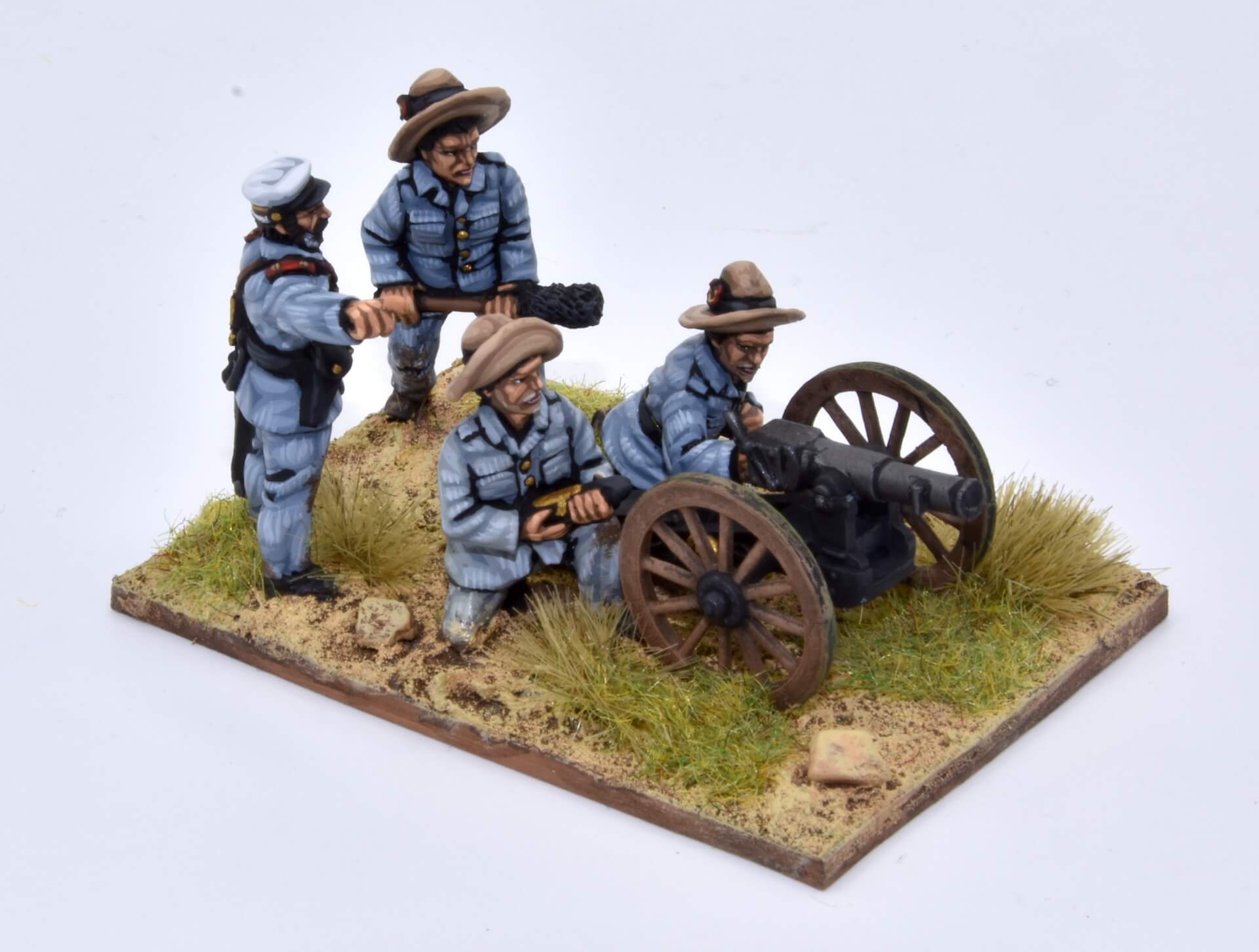 Spanish in the Philippines

We use cookies to ensure that we give you the best experience on our website.OkRead more